The first week in March marks our 4th friendiversary.  I met Nate four years ago at a day-long progressive house party for graduate students.  Nate arrived around hour 7 and by the time he joined the festivities, I was working 3 drinks simultaneously: a hard lemonade (my adult beverage of choice), a bottle of water (to chase the lemonade), and a Diet Coke (to chase the water).  While my hard-lemonaded-brain was clumsily juggling 3 bottles and 2 conversations, Nate found his way to my corner of the party.  After a brief debate about the wisdom of my beverage choices, we began the greatest conversation of my life–about the West Wing, the Grateful Dead, and a million other things (including the fact that I planned to never marry…)

Four months later, when Nate asked me to marry him, he unearthed the three bottle caps from that night, which he had kept (and still has!  See evidence below.)

So to celebrate 4 years of Nate, I made my 3rd attempt at painted cookies.  I am still mastering the technique (not as easy as it looks) but I think the paintings are recognizable enough that he’ll get the basic idea.  Happy friendiversary, Nate! 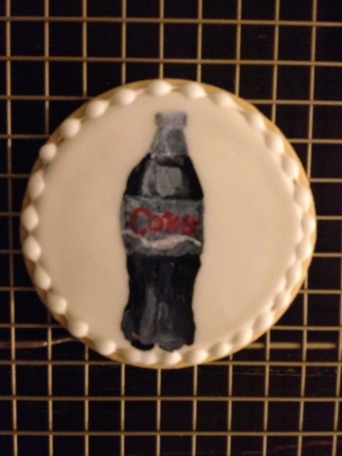 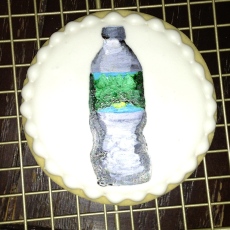 Look what I found in Nate’s desk!